When searching for images in Google, you’ll often be tempted to use the first beautiful picture you can find. It’s a good idea to stop and think for a second:

“But can I use images from Google? Is it legal?”

More often than not, these questions bring people to a conclusion that goes something like this:

“If I can find it on Google, that must mean that it is free, right?”

What You Will Learn

Once you finish reading this article, you will know:

Traditionally, all original work is protected under copyright from the moment it’s created. Copyrighted work cannot be used, adapted, copied or published without creator’s permission.

In contrast, public domain photos can be used, adapted, copied and published by anyone without restrictions. In the US, the public domain applies to work published before 1923 and any work that creator has specifically placed in the Public Domain.

Creative Commons is a non-profit organization that has released many copyright licenses known as Creative Common licenses. These licenses allow creators to communicate which rights they waive and which rights they reserve. At it’s very core, the restrictions include limiting the image to personal or commercial use, specifying if modification is permitted and whether the photographer expects to be attributed when the image is used.

Shihaam Donnelly explains the various Creative Commons licenses quite well in this infographic: 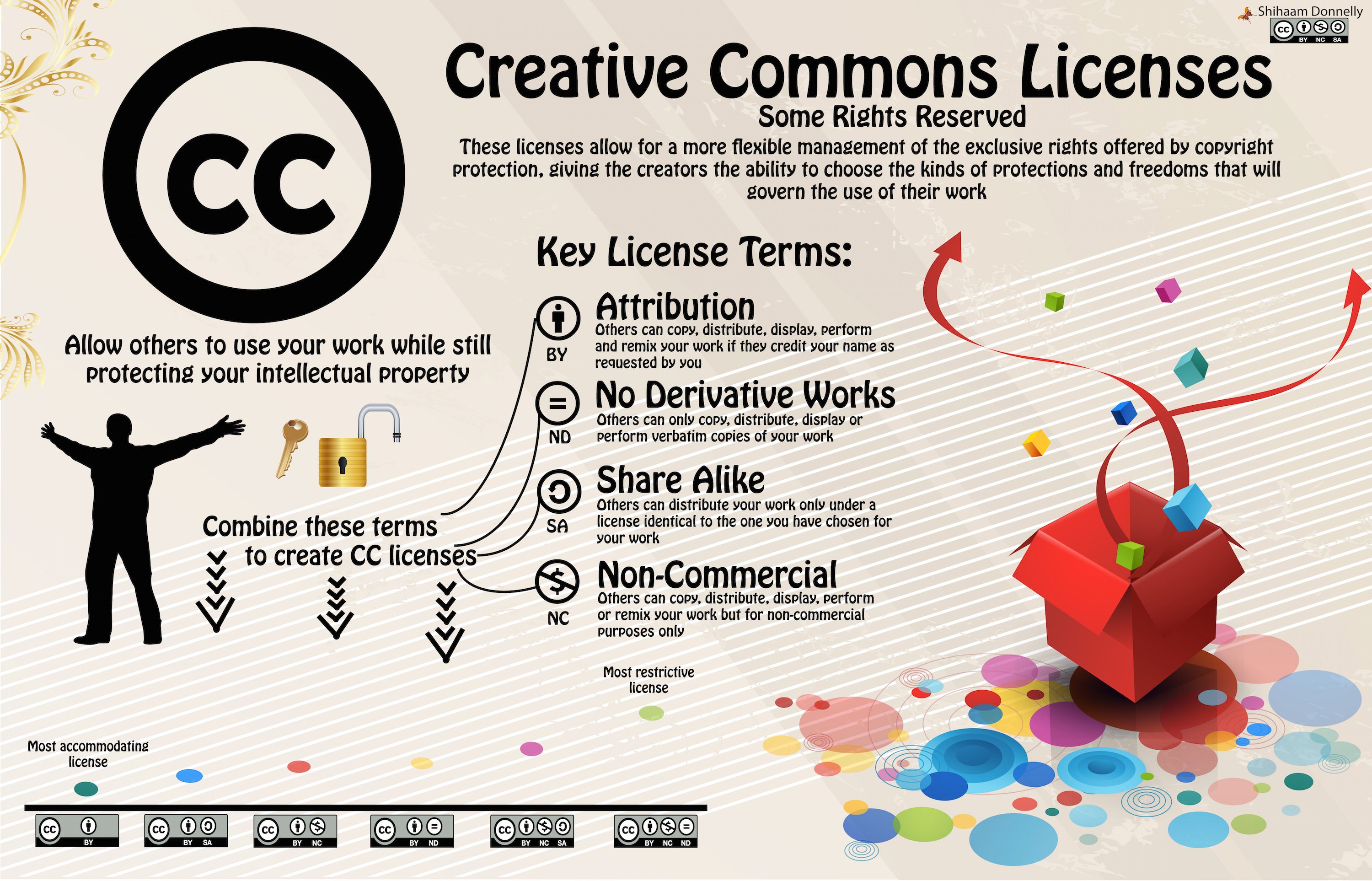 Finally, there’s the Creative Commons Zero or CC0. This is not a license per se, but rather a public domain dedication. This effectively allows the creator to give up all copyright and allow people to make any kind of use of their work without conditions. Even for commercial use, so you can use CC0 images in your products too, without asking for permission or giving attribution.

Fair Use or Fair Dealing

Fair use (or it’s equivalent in UK and Canada – Fair Dealing) is a concept that is mentioned a lot in the context of using copyrighted work. First of all it’s worth mentioning that fair use is not a right, but rather a legally defensible position. It’s interpretation is vague and largely depends on the context and the final decision on fair use is made on a case by case basis by the court.

According to Olivia Conti’s report “What is Fair Use and why is it so complicated?“ the four factors that are taken into consideration when deciding if the use of a copyrighted material is an infringement or not:

Generally, fair use of copyrighted work can be justified when using it for critique, educational purposes and news reporting. Thus it can’t be applied for any kind of commercial purposes, including using it in your products.

A model release, also known as a liability waiver, is a legal document signed by the subject of the photo allowing permission for the photo to be published.

You need a release, if you are using the photo for commercial use, or selling the photo itself. The only exception to this is when people in the photo are not recognisable, for instance when the image only displays their hands or they image is blurred.

While it may sound like it’s almost impossible to find images online that aren’t restricted in some way, the good news is that there are many websites dedicated to providing free images.

So rather than asking yourself if using images from Google is a good idea, visiting any of these websites should allow you to find exactly what you need free of charge.

Have you ever used images from Google in your designs products? Do you still think it is a good idea? Are there any other questions you have about image use? Let me know in the comments section below.

By Yuri Burchenya
Yuri is a Content Crafter at Sellfy. He's focused on inbound marketing, copywriting, CRO and growth.
Tips & tricks
See more posts
How to sell t-shirts without inventory in 2022 (tips + examples)
Thinking about starting your own merch business, but worried that it might require too much investment? Well… what if I told you that you can make money online by selling
11 best SendOwl alternatives in 2022 – ranked
For some reason, finding the right eCommerce platform for selling digital products is a tricky task. Even though there seem to be so many services out there, the majority of
How to make and sell merch on Twitch (+ merch ideas)
Let’s be honest: If you want to become a full-time Twitch streamer and make a living from your streams, you will need to find a way to make money beyond
How to sell Excel or Google spreadsheet templates
Everyone uses spreadsheets.  No, really. Everyone! It may be a part of your daily work, a tool to help you control your personal budget, or even an integral part of
We use cookies on our website to give you the most relevant experience by remembering your preferences and repeat visits. By clicking “Accept All”, you consent to the use of ALL the cookies. However, you may visit "Cookie Settings" to provide a controlled consent.
ManageAccept All
Manage consent