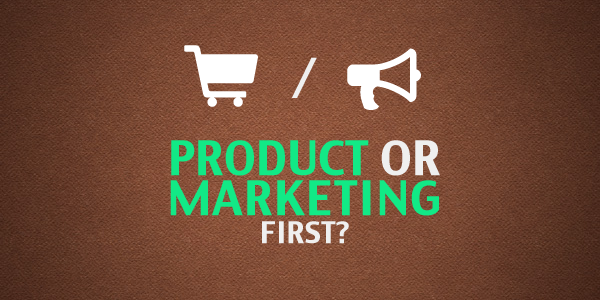 When I launched my first ebook, I wrote thirty-one posts promoting it on my blog before I even started to create the product. I did most of the marketing before I had the product ready (although I did know exactly what the product was going to look like and what was going in it). When I launched my second ebook, I wrote the ebook first and then took my sweet time getting around to marketing it. I’ve tried both options — creating my product first and marketing the product long before there’s anything to sell. With that experience behind me, it seems obvious which step to take first.

The Argument for Marketing First

There are quite a few people who feel strongly that you should start marketing your idea before you even figure out exactly what form it will take as a product. Clay Collins, the founder of a well-known online marketing program, has actually told his audience that he doesn’t create any of his products until after he sells them, which in turn lead to a product teaching his audience how to presell products (which has since been added into the Marketing Program).

The arguments for this approach are logical: First, you should find out exactly what your audience wants and sell them that, rather than building something and waiting to see what happens. Second, if you can sell a product before you actually create it, you’ll have more resources to build it right. In a roundabout way, this is the same logic that powers Kickstarter.

The Argument for Creating Your Product First

On the other hand, not having a clear idea of what you want to sell makes it a lot harder to market. You might start out with one concept but as you build it, you will tweak that idea, if not entirely change it to go with something else. That makes marketing a lot harder.

There’s also almost always slippage in the timeline when you’re building a product, particularly if you don’t have a lot of experience to draw on when estimating how soon you can be ready to launch. Even after building multiple products, I’m still a little off on estimating how long something can take. Chris Guillebeau, a blogger who has used his information products to launch a book-writing career, actually discusses his first product in his new book, $100 Startup: he had surveyed his audience about creating a product that showed how to travel the world on a budget and gotten a great response. But the product failed to sell — despite the fact Guillebeau had essentially marketed it ahead of time. But he was able to collect data from the first launch and create a whole new product that sold 500 copies on the day he launched. Without the real information from that failed product, Guillebeau couldn’t have built his more successful follow up.

The Chicken or the Egg?

It’s hard to argue against knowing your audience inside out before building your product — especially when you’re creating something like an ebook or app for the very first time. But it takes only one little slip up on delivery to ruin all the hard work on your marketing.

It’s anecdotal evidence, but in my experience, the best option is to have your product to a point where you’d feel comfortable selling it before you start marketing hard. You can and should do everything you can to prove that your audience wants what you are going to sell beforehand, but you can do that by blogging, surveying and otherwise establishing a product — not marketing something that doesn’t exist yet. Build your product first and you’ll be in better shape to market it.

Yuri is a Content Crafter at Sellfy. He’s focused on inbound marketing, copywriting, CRO and growth.