Her success story started a year ago when she beat 17,000 other social media influencers from over 125 countries and won the Best Job On The Planet competition run by ThirdHome. At that time, Sorelle Amore was a 28-year-old Australian living in Iceland as a travel photographer.

For the next 3 months after winning the title, she was hardly sleeping. She was creating videos, photos, and articles while experiencing the best times in 12 luxury homes around the world. Right after this intense period, brand sponsorships were knocking on her doors. Her obsession with creativity enlightened others on her Youtube channel and, eventually, she created a hashtag that did its own thing.

Even though she felt as if she didn’t know what she was doing, she’s now making a living as an advanced selfie photographer. On top of that, she made $25K in the first month of selling Lightroom Presets on her Sellfy store. 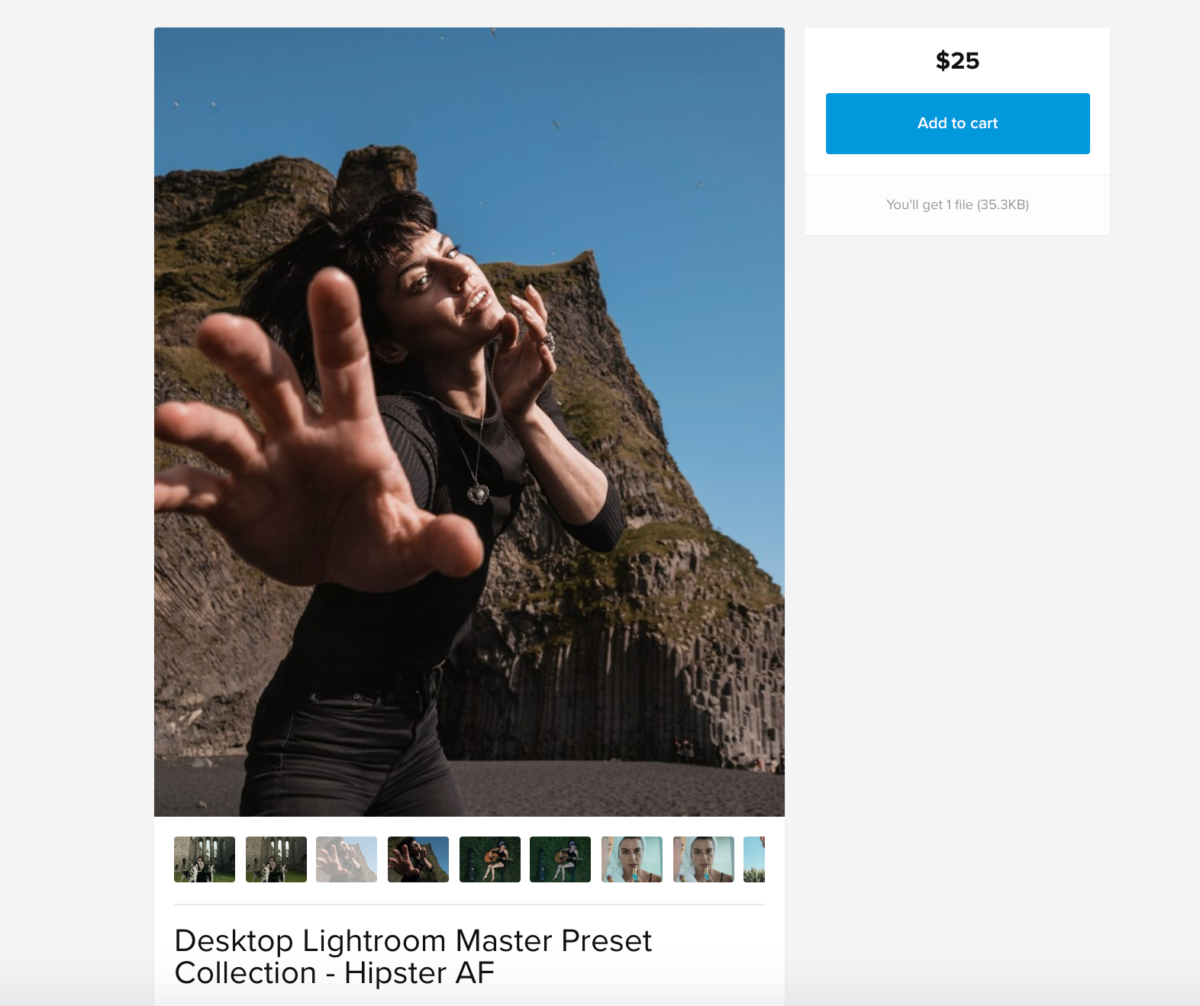 Today, 365 days after the completion of ‘Best Job On The Planet‘, her YouTube success has grown to 457,000 followers (and keeps growing). Sorelle realized that being an influencer and a digital nomad takes dedication, hard work, and discipline, but she still loves it, pushes her limits and encourages others to try for themselves. Sorelle describes her start on Youtube:

“People are really scared at the beginning, but all you have to do is embrace that fear and just do it. I used to be this really shy girl, awkward in front of the camera, really nervous. I just knew that I love the idea of creating content.”

Her first expressions of creativity showed up on Youtube in April 2011, and she recalls that time saying, “Seven years ago, YouTubers were made fun of, no one liked YouTubers.”

Now, Sorelle Amore has risen to become one of the world’s most sought-after influencers in photography. But, that didn’t happen overnight, she’s been a creator for the last 5 years and has shown up for “creating for the sake of creating” 2 years straight.

“I just trusted the process, trusted where it’s all going to go and was patient and kept on working on my craft. That’s the most important thing you can do. You have to acknowledge you’re gonna suck but still progress and still produce the work.” 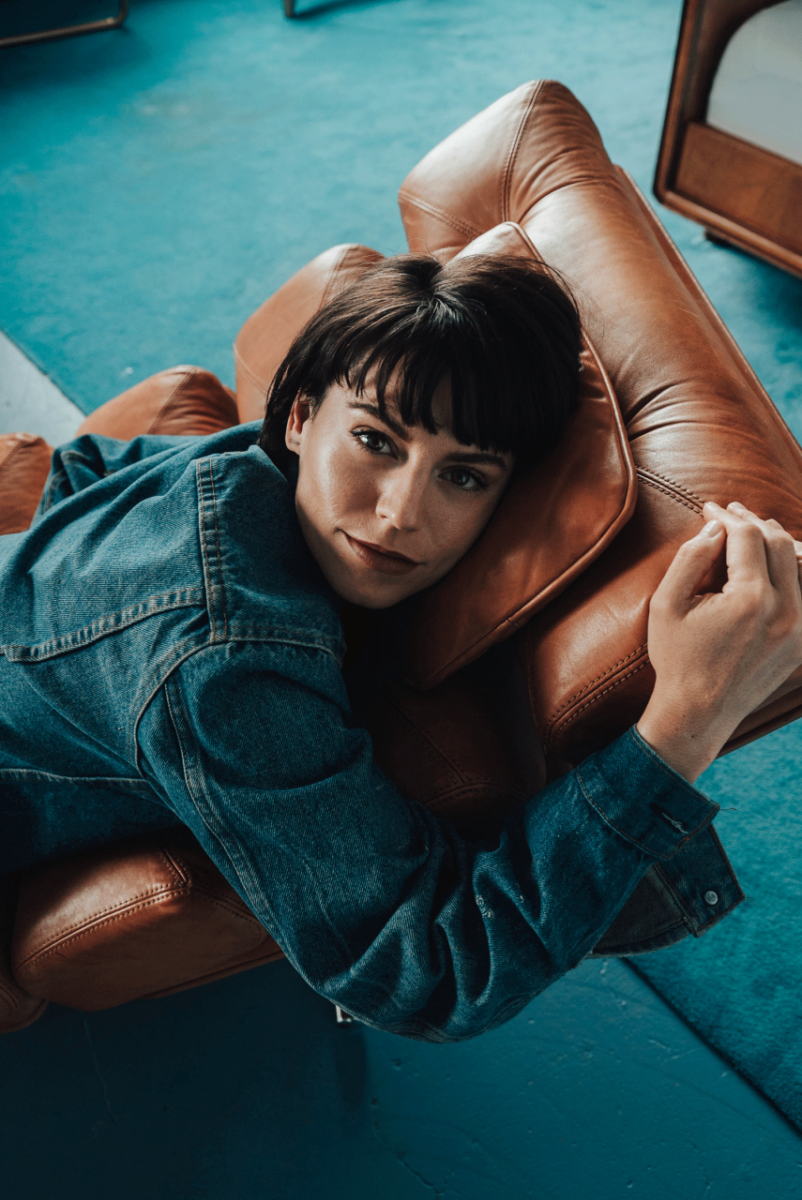 Sometimes we can feel it, we can feel when the stars align and something is going to be successful. But sometimes, it happens for the strangest reasons, all we have to do is hit publish on a video called “How to pose in pictures”.

It’s still one of her most watched and shared videos with more than 2,6 million views, which means it’s the video that reaches far beyond her subscribers’ list.

“I was making travel videos and things, and I had a great time and then when I was doing ‘The Best Job on The Planet,’ one of the homes I remember very distinctly. I was staying in 12 luxury homes around the world, and the lady asked me to take beautiful photos inside her house with me in them, and I was like, “OK.” And I took them, and something went up in my brain, and I didn’t feel like they were a set of portraits because sometimes, I don’t know, something changed, and I just thought of an advanced selfie. And so, I called it an advanced selfie and then I started teaching other people how to take them.” 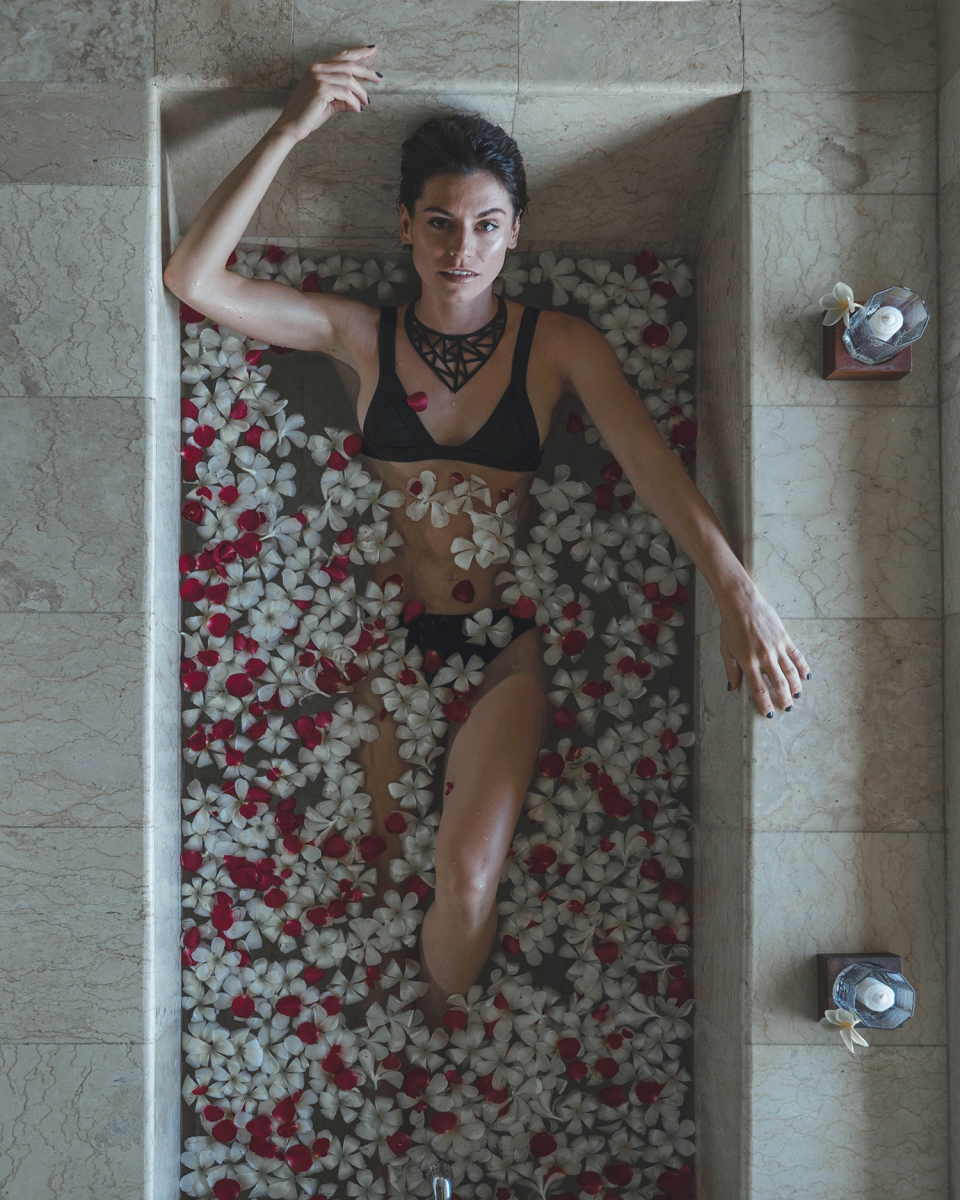 Sorelle is the queen of selfies and her fan base is asking for more of her extreme personality and the huge enthusiasm she has for teaching others how to master their photography game. All of that has led Sorelle to a new niche in an underserved market in photography – #AdvancedSelfie on Instagram. Even though the movement started only a few months ago, there are 7,841 posts already, and Sorelle has huge plans for the near future.

“I just want to see if this is something I could make into a very respected artform, I guess. Even if it’s called advanced selfies” explains Sorelle when asked about what is coming up next for her as the first advanced selfie photographer. “I wonder how far I can take this… I would love to see my advanced selfies maybe in books, definitely in advertising like giant billboards or in magazines. That’s the next thing.” 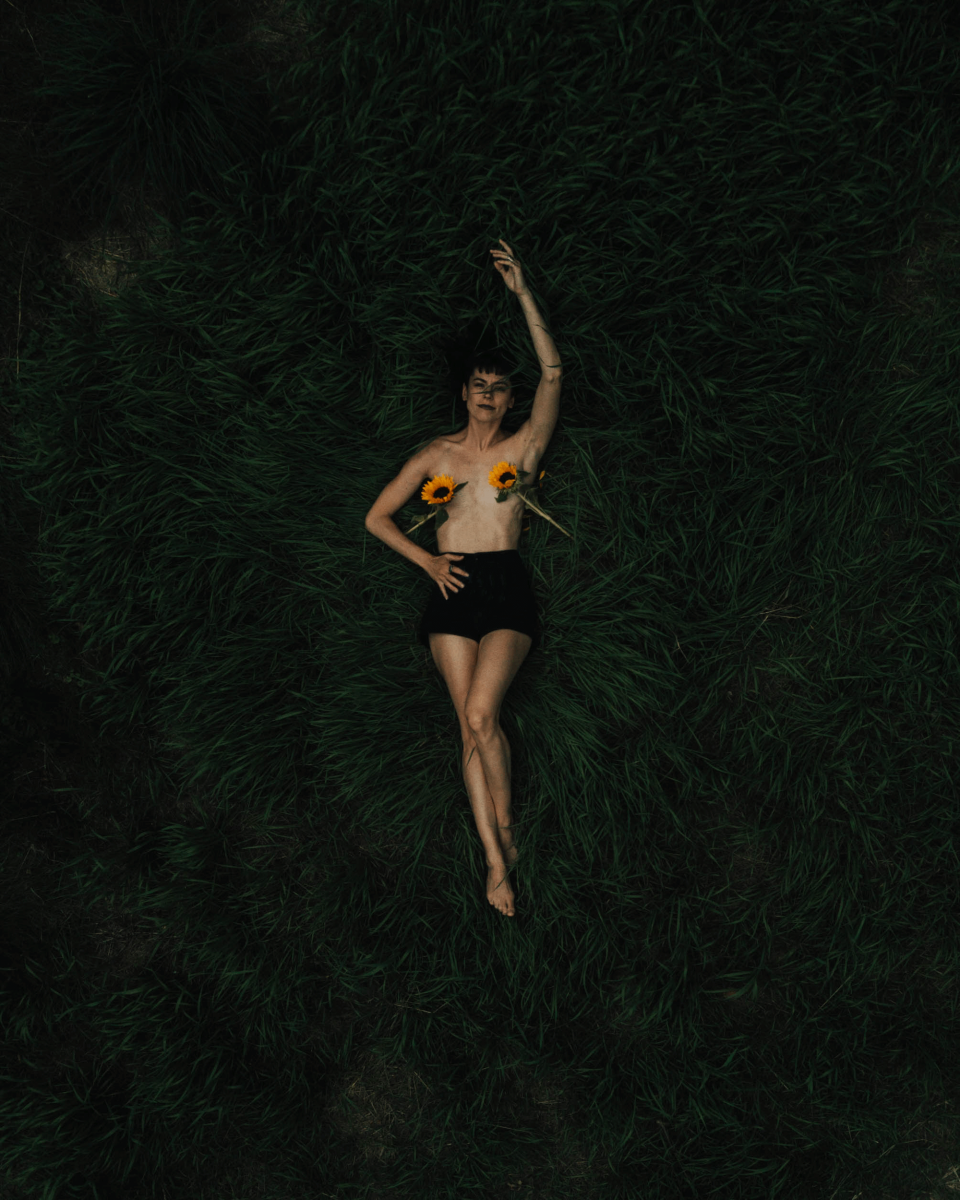 We’re certain she’s going to succeed in whatever is on her way, and brands are likely to co-produce content with her. Even looking at Google’s recently published marketing insights to carry you in 2018 report, 1.5 billion people visit YouTube each month and influencers are just as likely as celebrities to drive buying decisions. However, collaborations with YouTube creators are 4X more effective at driving brand familiarity than those with celebrities.

The progress she has made is enormous. Her most recent mass growth on YouTube was 300,000 in three months, and people consume over two million views of her video content every 30 days. As a fun fact, she only started monetizing her YouTube channel three months ago.

“I had 120,000, and it was just like traveling alone, and then the massive shift happened, and I started growing a lot, and that’s when I started it”, she explains. “It was never about the money, and it still isn’t about the money. I just can’t help it – I have to pick up my camera, that’s what I have to do, it’s inside of me. “

As she began to monetize her YouTube following, she also discovered the huge demand for Lightroom Presets when she started selling Sorelle Amore’s Master Preset Collection – Hipster AF, which includes 17 presets of her unique editing style. In less than a month after launching her presets pack, she earned $25.000 from selling them on Sellfy. She never expected this to turn into a decent side income with so little effort. 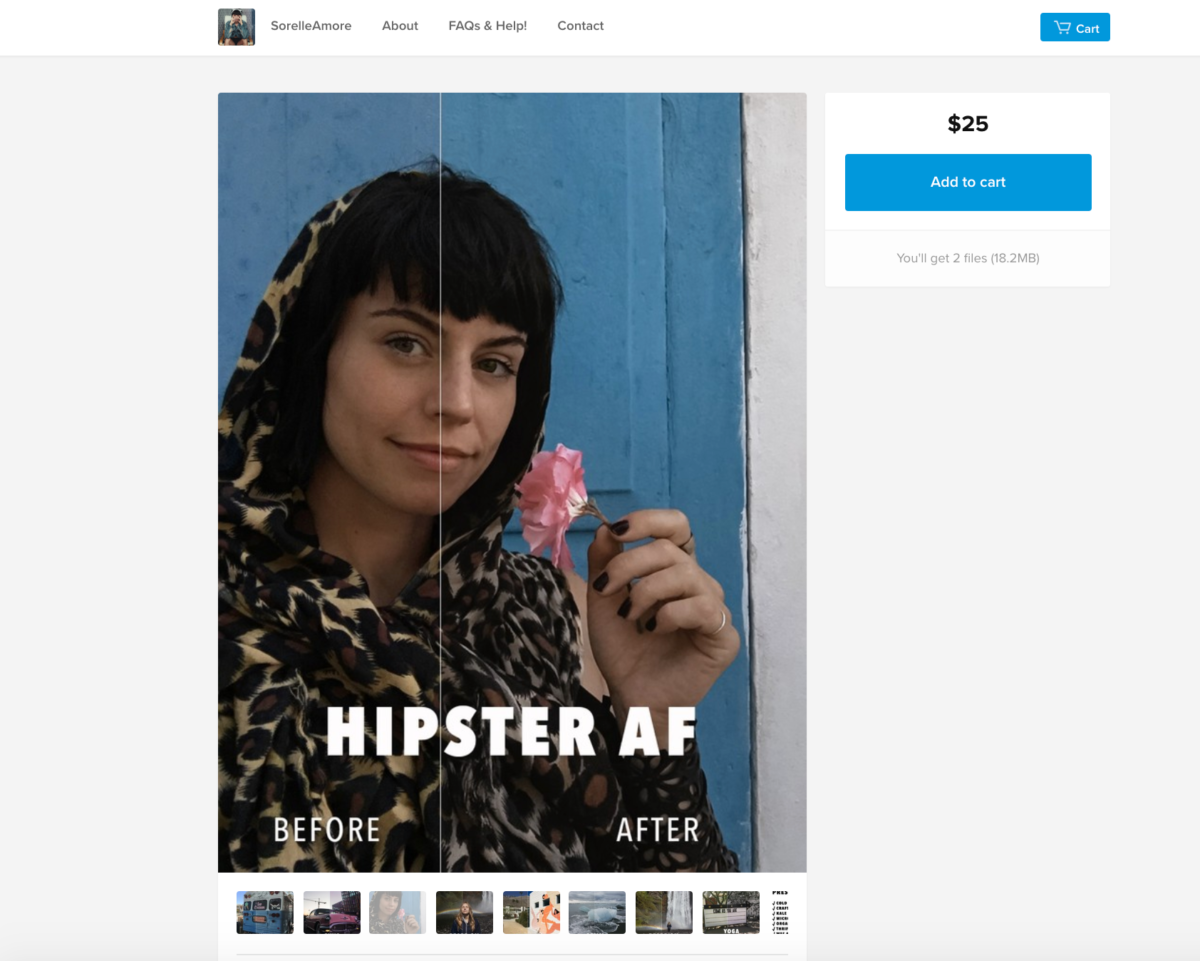 When asked about her success on Sellfy, she suggests to make presets affordable and make them fair: “I have friends with 10,000 subscribers and they sell them for, I think, $7. They made it a lot cheaper for their audience and it works really well for them. “ 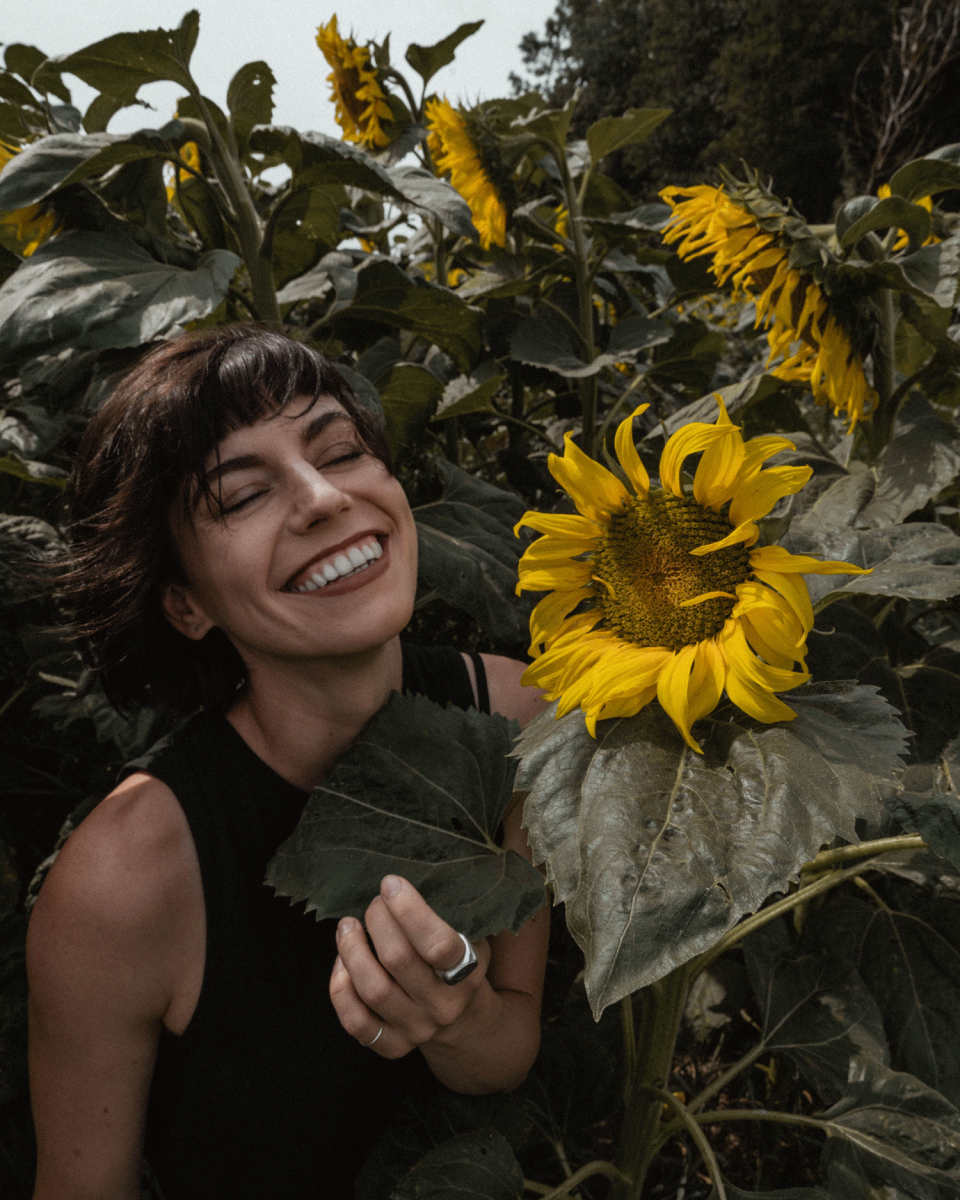 She already knows the do’s and dont’s of creating a business online, since she has been working on her projects online before she was even 20 years old.

“You know, you have to learn everything about it. Like, I learned about websites, developing websites, selling stuff online, affiliate links – everything. And now I’ve landed on YouTube, which has been my dream for years, and it’s the best job ever. “

Apart from selling presets online and earning a side income with that, she has multiple sources of income, “Brands sponsorships are a big chunk of my income. YouTube ads, and then I also have small affiliate links for selling other products.”

It is not a secret that there is a vast number of skills needed to be a successful influencer, and no one person has them all. Even Casey Neistat (the most influential and recognizable creator on YouTube) encourages to do it your own way. He says “If you’re doing what everyone else is doing, who gives a $&@!?”

Since the beginning of her commitment to YouTube, Sorelle has found her way and is keen on sharing her knowledge with her profound community on Travel Influencer Tours In Iceland. Her website tells that the latest tour has been sold out in record time and her followers keep asking for more dates of these unique adventures in Iceland.

Stunning content creator and a one-woman powerhouse with more than 2 million views in 30 days on YouTube is continuously challenging not only herself but also her community to master their skills in the art of photography through advanced selfie challenges. She goes on to say that “the world needs art always, so I think it’s just fun to bring art into the picture. It’s one of my favorite things to do, just to change people’s perceptions of what is normal and bring art into every moment of your life. “

It seems that nowadays, it’s all about growth, scale and being a successful entrepreneur. That’s what we tend to expect. But, when we asked Sorelle about her creative process and what she keeps in mind while crafting her videos and photography, she surprised us with her fresh perspective.

“I’m going to make everything around me beautiful, that will be my life. I fell in love with the idea that everything could be beautiful. I’m not talking luxury, there’s beauty in everything and I just try to capture it. “

Sellfy creators Video & Photography
By Darta Ansone
Editor & digital product enthusiast. She likes to re-think the obvious. Advertising is an art and a science and she loves both.
Success stories
See more posts
Marketer turned viral audio specialist: how Austin became one of the most streamed classical composers in the world
Austin is a classical composer, audio specialist, and music teacher best known for selling sheet music online and creating viral TikTok and Instagram audios.  Austin first started off writing music
From humble beginnings to realizing a dream: how Charlie's music production hobby turned into a lucrative career
Charlie is a talented music producer and sound designer from Germany. He is best known for creating original compositions, drum kits, samples, one-shot kits, and other sounds for producers worldwide.
From hobbyist to filmmaker: how David built an online business selling film overlays to his YouTube audience
David Killingsworth is a successful YouTuber and filmmaker who’s had a lifelong passion for video production.  He is best known for creating digital assets such as film overlays, burn transitions,
How award-winning underwater photographer Tobias uses Sellfy to earn passive income
Tobias Friedrich is a Germany-based award-winning underwater photographer who loves capturing the beauty of the world within our oceans. With his photography, he brings to the surface the elegance and
We use cookies on our website to give you the most relevant experience by remembering your preferences and repeat visits. By clicking “Accept All”, you consent to the use of ALL the cookies. However, you may visit "Cookie Settings" to provide a controlled consent.
ManageAccept All
Manage consent